Healthcare month at SCAO was not something that was planned but it was something that just fell into place and ran very smoothly. It was the combination of Chris from Pacha Youth (USA) coming over for a two month period to help implement a healthcare project in Som Roung Village, and Ali and Ana from Estrellas-de-Camboya (Spain) who arrived with 200 toothbrushes and the skill to carry out eye-sight examinations. This combined with other projects that have been in the pipe-line, the month just fell together and every week there were two projects taking place.

These classes were carried out by Ali and Ana in the New School in Som Roung Village. They had brought over 200 toothbrushes and toothpaste from Dentaid from Spain. It is a common problem in Som Roung and all over Cambodia that children are eating too much junk food(crisps and sugar candy) and soft drinks loaded with sugar and chemicals (Samuri) It was agreed that Ali and Ana would give presentations to the older students and then work down to the younger students. The presentations were not given to the younger students because they would not be mature enough to grasp the concept of brushing your teeth three times a day. The classes were carried out with the help of Vibol to ensure that all the students understood everything that was being explained to them. The main areas that were covered were.

The idea behind this project was to get the children into the habit of brushing their teeth on a daily basis.There were 30 toothbrushes left over and these were distributed to people in the village. 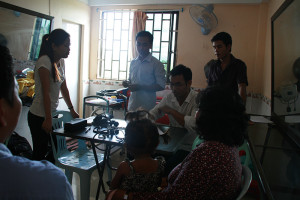 As part of Chris’ research into the needs of the community he contacted 4 doctors in Phnom Penh to see if they could come out to Som Roung and take blood samples from 14 children. This was to test for various health related issues such as Vitamin A deficiency, diabetes, worms and protein deficiency. The project took three hours to complete and the blood samples were sent back to a lab in Phnom Penh to be analysed. The test results came back and indicated no immediate worries for the children, although some of the protein levels were below the level that they should have been. 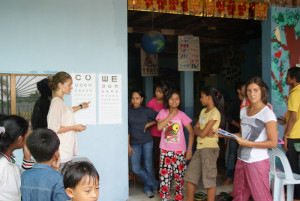 It isn’t very common to see Cambodian people with glasses, and it is mainly down to a couple of factors. Firstly, people cannot afford the glasses if they need them. Secondly, people may not know that something is wrong with them. Lastly, people may not know that there is a way of improving their eyesight. Again Ali and Ana were heading this project with equipment and 60 eye glasses that were donated by Opti-Kas from Spain. The objective behind this project was to provide glasses to the children in the Centre that needed glasses; this would in turn help the children to read better in class and not fall behind because of their ability to see the board. All in all there were three children in the Centre that needed glasses. With 57 pairs of glasses remaining, Mr.Sameth spread the word around the community that surrounds the Centre. Soon there were a lot of older members of the community coming to get tested. Some were watchmakers, tailors, cooks, butchers or just interested in reading. After finishing with the Centre and the neighbours, they took the glasses to Som Roung village where they continued with the eye examinations to the elder villagers, until they ran out of glasses. 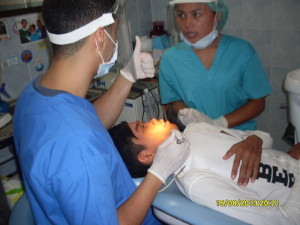 Through collaboration with Cambodian World Family, SCAO was able to organise a day for the Centre kids to travel out to their dental clinic and be seen by professional dentists. Here they received a general check up to see if there were any complications. Everything went well and none of the children had any problems. We are now in the process of bringing students from the Old School to CWF. 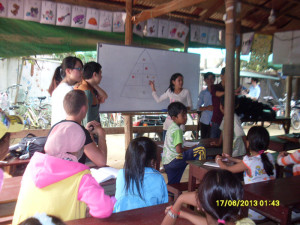 AIESEC has always been working closely with SCAO by sending over volunteers to help out in English classes or in special projects. Here AIESEC sent several volunteers who are also medical students to the Old School to carry out workshops in the areas of healthcare and nutrition. There were some volunteers from China and Australia, but the majority of them were from Cambodia and studying in Phnom Penh. The workshops were carried out in Khmer to ensure that the workshops had the full impact that is needed.