Cambodian people don’t celebrate Christmas but I think most people have an idea what it is about and why all the western people are getting ready for it months before. Of course Buddhists don’t know what Christmas is, but still they are excited to wear Christmas hats and sing Christmas songs, probably Cambodian kids more than the rest. At SCAO we sang a lot of Christmas songs during December. From every classroom you could hear kids singing/screaming “Jingle Bells”, or “We Wish You a Happy Christmas” or other songs. In some cases, we the teachers, sang louder than the kids, I guess. To be honest, I think all of us missed the Christmas mood at home. So as everybody can imagine we had a great time singing “Jingle Bells” every day. The kids were addicted to this song.  Even 3 weeks after Christmas I sometimes hear them singing it while playing in 30 degrees heat on the street.

For the year 2013 I associate the 27th of December with Christmas Eve because on this day we had our Christmas celebrations at the SCAO School 2. As all the former volunteers did over the previous years, we organised a Christmas party. I don’t want to praise ourselves too much, but in this case we can all be proud of this organisation and the amazing result. The Christmas party was epic! 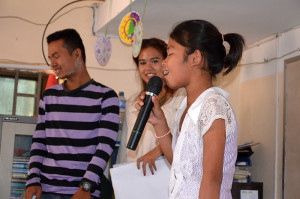 Everyone, and I mean really everyone, had fun and was happy.The heat was another strange thing for most of us except the Australian guys, who are here at the moment. Celebrating Christmas while the sun is burning your skin and you are running around in skirt/shorts and a t-shirt is strange. But actually whether it’s 40 degrees on the beach or there is snow and coldness, Christmas is Christmas. It’s only because we grew up in a country where normally there is snow at wintertime, we feel we need to have coldness to have a perfect Christmas. But to be honest, this Christmas was more than perfect – even without snow. The Christmas I had in Som Roung couldn’t have been better and will be an unforgettable experience.

All the kids, nearly 300, joined the party. We had a long programme which included many different events (dancing, singing contest, games, lunch, etc.), so that everybody found something which he or she found most interesting. After the kids had devoured masses of watermelon, we gave out toothbrushes and toothpastes as a present. I want to say a big Thank You to Christoph, who kindly donated them to the students.

One of my favourite games of the day was the ‘Rice Challenge’. We put thousands of little rice-corns into a little bowl and the kids had to guess how many were in there. And you know what? Nobody believed us, but we counted every single one of the 1519 rice-corns before. During the games all the kids were dancing on the dance floor we prepared in the downstairs classroom. Let me tell you, they weren’t just dancing – they totally freaked out! They became little gangsters on the dance floor. The music was terrible, though, not my taste!

The best part of the whole celebration was the singing competition. All the students had the chance to apply for it beforehand. None of us expected such a big interest. We heard a variety of English children’s songs and also Khmer songs. The most impressive thing for me was that every child seemed to be really confident on the stage. Nobody was suddenly too shy to perform, or became red. In comparison to Germany, there would have been only 2-4 kids on the stage singing, because the rest would have been too nervous. Although we heard Bingo a lot of times, not to mention the Teddy-bear song, it was so much fun to play a judge and to see the lucky faces of the winners at the end.

After the singing competition, the first ever disco took place in Som Roung. The music was loud, the dance floor was full, and everyone was smiling and dancing how he or she was in the mood to. It was just brilliant. Some of us were dancing too, but the rest were sooo tired from the day, sitting exhausted in the kitchen. If we didn’t turn off the music, the kids probably would have danced the whole night. At the end of the day there were some smiling kids at home and some tired volunteers, who were still really animated and thinking of this nice day.