Samuth and Yem Pov are Cambodian Buddhist monks from the village of Som Roung. They are 17 and 18 years old and they come to SCAO Monday to Friday for two classes a day, studying English and sometimes maths. They have been part of the monkhood for 5 years now and they live in the Pagoda in Som Roung along with 60 other monks. Samuth and Yem Pov became monks not only for a religious life but also for a better education. Living in the countryside meant that they had limited educational opportunities and as they had a hunger for education, but no opportunities to fulfil it, this monastic life gave them the chance to study. They were also eager to learn more about Buddhism and share Buddhist ideas as it helps to clean the mind and bring peace.
It is common in Cambodia to see many monks dressed in saffron robes with shaved heads and I often wondered the meaning behind this. Samuth and Yem Pov explained that the saffron colour dates back centuries. Orange was chosen mainly because of the availability of the dye at the time. This tradition stuck and orange is now the colour of the robes for Theravada Buddhists in Southeast Asia, whereas maroon is the colour for Tibetan monks. As for the shaved heads, this is to symbolise simplicity and detachment of materialism. They do not have to think about styling their hair and it allows them to focus on more important things than fixing their hair every day.

Theravada Buddhism has been the state Cambodian religion since the 13th century. However, during the Khmer Rouge period all monks were forced to leave the temples or were killed, religion was forbidden and temples were destroyed. Today, it is still rebuilding from the loss of so many leaders and teachers during this period but still the country is about 95% Buddhist. 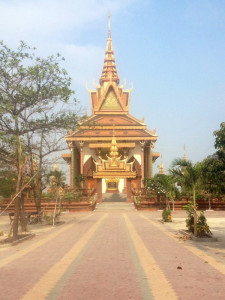 This is the pagoda in Som Roung where Samuth and Yem Pov live. Each day, Samuth and Yem Pov get up at 4am and meditate for one hour, they then clean the pagoda and water the flowers. After this they learn the Buddhist Dharma and disciplines, as well as the history of Buddhism. From 6am-12pm they are allowed to eat food by which the village cooks for them. At about 10.30am they walk the village in Som Roung in bare feet and can receive food from anyone. In return for the food, they give them a blessing. They can drink water whenever they like but they are not allowed to drink alcohol. They have class in SCAO from 5pm-6.30pm and they also read books and undergo new constructions in the pagoda. In the evening they preach the Dharma again.
The boys outlined that the percentage of monks are decreasing today as the laws are very strict and hard to follow for teenagers. It can provide many opportunities for people but it can be a difficult life to live by.
Their most inspiring Buddha quotes are ‘Do good and good will come to you’ and ‘Work out your own salvation, do not depend on others.’
For Samuth and Yem Pov, becoming a monk provided them with many opportunities that they might otherwise not have.